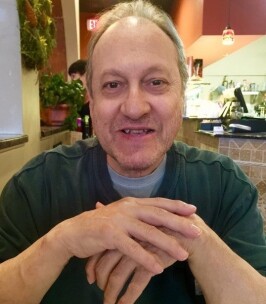 Share this tribute
Memorial Candles Lit for Vincent | SEE ALL
Light a Candle
"We are honored to provide this Book of Memories to the family."
— Oliverie Funeral Home
"Rest In Peace "
— Anonymous
"Maria, I am thinking and praying for you and you family. I am here for you and I love you!!! Condolences and Sympathy."
— Georgie York
"My condolences to Maggie and all the Calcagno family. Rest In Peace Vincent. God Bless. "
— Odiles Rossdo
"My Dearest Uncle Vinny, always in my heart. I love you forever. "
— Joanne Parisi Bartmess
Funeral Details Memory Wall Photos & Videos Send Flowers

Print
Vincent Salvatore Calcagno passed away peacefully in Manchester, NJ on April 19, 2022 at the age of 71. Vincent was born in the Bronx, NY on July 4th 1950 to the late Rosario Calcagno and Mary Calleri. Vincent was raised on Arthur Avenue with his sister Anne and his brother Joseph. Vincent joined the US Navy in 1970 where he served for 2 years in Derry, Northern Ireland where he witnessed the historic tragic event of Bloody Sunday. Upon returning from the Navy he worked 37 years for The New York Telephone Company (now known as Verizon) where he met his wife, Magy. In 2008, while on the job, Vincent received a hero’s award for assisting a man who was trapped under a collapsed crane. In addition to his parents, Vincent was preceded in death by his brother Joseph Calcagno and his brother-n-law Joseph Vescey. Vincent is survived by his wife Magy; his sister Anne and sister-n-law Anita; his children Hugh and his wife Kathy, Lissette and her husband John, Jessika and her husband Mike, Maria and her husband Daniel, and Amanda; his grandchildren Andrew, Owen, Devin, Hannah, Sabrina, Mason, Dani, Sofia and soon to be new grandson; as well by his nieces and nephews. Over the years Vincent had many passions and hobbies, including playing softball, skeet shooting, and racket ball. He loved watching sports and was a true Yankees fan. He liked listening to music and watching western movies. Vincent lived for his family, he loved family events such as barbeques, trips and cruises. “And in the end, the love you take is equal to the love you make”. You will be truly missed, your memory will live on forever in our hearts. Farewell Papa Bear.

To send flowers to the family of Vincent Salvatore Calcagno, please visit our Heartfelt Sympathies Store.

We encourage you to share any memorable photos or stories about Vincent. All tributes placed on and purchased through this memorial website will remain on in perpetuity for future generations.

Please accept our most heartfelt sympathies for your loss... Our thoughts are with you and your family during this difficult time.
Angela Panuccio & James McSweeney - Saturday April 23, 2022 via Heartfelt Sympathies
Share This:

Please accept our most heartfelt sympathies for your loss... Our thoughts are with you and your family during this difficult time.
Love Always SCOTTO FAMILY - Saturday April 23, 2022 via Memorial Tree

Wishing you peace to bring comfort, courage to face the days ahead and loving memories to forever hold in your hearts. Your Brother Jason and family.
Jason Gomez - Friday April 22, 2022 via Heartfelt Sympathies
Flowers were purchased and a memorial tree was planted
Share This:

Maria, I am thinking and praying for you and you family. I am here for you and I love you!!! Condolences and Sympathy.
Georgie York - Friday April 22, 2022 via Memorial Candle
Share This:

May your heart and soul find peace and comfort.
Katerina - Friday April 22, 2022 via Heartfelt Sympathies
Flowers were purchased and a memorial tree was planted
Share This:

May Vinnie rest in the peace he deserves after such an amazing life. I love you guys so much!
Ashleigh - Friday April 22, 2022 via Heartfelt Sympathies
Share This:

My condolences to Maggie and all the Calcagno family. Rest In Peace Vincent. God Bless.
Odiles Rossdo - Friday April 22, 2022 via Memorial Candle
Share This: