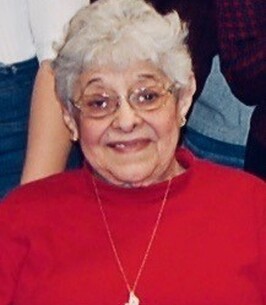 Share this tribute
Memorial Candles Lit for Victoria Ninivaggi | SEE ALL
Light a Candle
"We are honored to provide this Book of Memories to the family."
— Oliverie Funeral Home
"What a beautiful & full life Victoria led. I'm sorry for the loss you are all experiencing. May she Rest In Peace & may God give all of..."
— Laurie Large
"Sending many prayers and thinking of your family with heartfelt sympathy during this difficult time. Grandma was such a special woman. I..."
— Kristin Defino
"You touched so many lives, in so many ways"
— Kathy Armstrong, RN AMSON
Funeral Details Memory Wall Photos & Videos Send Flowers

Print
Victoria Ninivaggi, 92, passed away peacefully surrounded by family Monday, February 8. She was born on January 4, 1929 above a candy store in Manhattan’s Little Italy to Paul and Anna Licandro. She later moved with her parents to Bensonhurst, Brooklyn where she was raised and attended school. Victoria did not learn English until first grade, but she went on to earn degrees in Nursing from the Brooklyn School of Nursing and a B.A. and an M. Ed. From New Jersey City University. She worked for a number of hospitals in New York and New Jersey but spent the better part of her career as an Operating Room nurse at Jersey Shore Medical Center. In the latter half of her career she served as the Director of Clinical Studies at the Ann May School of Nursing where she was respected by her colleagues and students alike for her career experience and passionate dedication to the medical profession. She leaves behind a legacy of Registered Nurses who populate the staffs and hold leadership positions in hospitals and medical facilities throughout the country to this day.

She married James Ninivaggi, her soul mate, in 1952, and they remained husband and wife for 33 years until his untimely death on May 7, 1985. She and Jim raised 5 children together first in Cranford, NJ and then Howell, NJ. She later retired to the Leisure Knoll community in Manchester, NJ in 1994. A devoted Roman Catholic, Victoria was a parishioner of St. John’s RCC, Lakehurst, and, earlier, St. Veronica’s RCC, Howell, where she sang in the choir. Her rendition of “Ave Maria” was a centerpiece of the church choir’s Christmas Eve performance for many years.

Victoria remained active in retirement, including as a volunteer giving out flu shots through the Ocean County Board of Health, as a member of the Columbiettes, and as a member of the singing group the Knollaires. She took great pride in her Sicilian heritage, which was best expressed through the many traditional family recipes she would prepare for her family, especially at the holidays. The highlight of the year was the Christmas Eve feast, which would take weeks to prepare. Her family and friends will sorely miss her delicious food, encouragement, inspiration and wisdom.

Victoria leaves behind a large and loving family that was the center of her life. She is survived by a daughter, Joan McNamara & her husband Stephen, 4 sons & daughters-in-law, Richard & Loretta, James & Dana, Thomas & Theresa and Steven & Cynthia; 10 grandchildren, Michelle, Stephen, Marc, Jack, Matthew, Megan, Alexander, Samantha, Alyssa & Emily and 6 great grandchildren, Kayleigh, Milana, Declan, Isla, Charlotte & Merrick. The Funeral Liturgy is Saturday 10 AM at St John’s Church Lakehurst with entombment to follow at St Mary of the Lake Cemetery, Lakewood.

To send flowers to the family of Victoria Ninivaggi, please visit our Heartfelt Sympathies Store.

We encourage you to share any memorable photos or stories about Victoria. All tributes placed on and purchased through this memorial website will remain on in perpetuity for future generations.

Our deepest condolences to the entire Ninivaggi family. You will all be in our thoughts and prayers.
Paul and Trish Saliba - Monday February 22, 2021 via Donation
To: Ann May Center Nursing Scholarships
Share This:

In loving memory of Victoria Ninivaggi
Kevin, Doreen & Ali Guilfoyle - Friday February 19, 2021 via Donation
To: Ann May Center Nursing Scholarships
Share This:
JJ
My sincere sympathy to Vicki’s family. She was a very caring and beautiful person with an even more beautiful voice. I enjoyed being with her at our Knollaires practices and concerts. We shared many laughs together! We also served together in the Italian-American Club.
Please find consolation at this sad time in knowing friends care.
Joan De Jessa
Joan De Jessa - Saturday February 13, 2021 via Condolence Message
Share This:

In Memory of Victoria Ninivaggi, Always in Our Hearts.
Francine Guilfoyle - Saturday February 13, 2021 via Donation
To: Ann May Center Nursing Scholarships
Share This:
JK
Mrs. Ninavaggi was a wonderful, kind, amazing , woman and teacher who was so full of laughter and love . She always had a smile and I remember this now at age 50 graduating from Anne May about 25 yrs ago . I was so blessed to not only know her but to have her teach me while at Anne May School of Nursing . I am holding your family close to heart and in prayer during this very difficult time . May your beautiful memories of her cradle you with love while she watches over you and help ease your sorrow .
Jodi Kreppel
Jodi Kreppel - Friday February 12, 2021 via Condolence Message
Share This:

Our deepest condolences to the Ninivaggi Family. Your family is in our thoughts and prayers.
Mary & Tim McManimon - Thursday February 11, 2021 via Donation
To: Ann May Center Nursing Scholarships
Share This:
J
Dearest Joan, Steve, Michelle, Stephen, and your entire family,
Please accept our sincere condolences for this immeasurable loss as we share in your grief.
In building our friendship over the many years I have been doubly blessed to know and love your mother Vicki. It is my privilege to consider her a friend and will cherish her terrific sense of humor, professionalism, and honesty. We enjoyed conversations about nursing, family, cooking and life. I will hold dear these memories knowing that I am a better nurse, person, and friend for having Vicki in my life.
Vicki encompassed many wonderful attributes, led by example, faced adversity with grace and yet chose a path to share all she had with so many. She was a marvel, a force to be reckoned with that will be remembered fondly. I have studied nursing along with the writings of Florence Nightingale, Clara Barton, Dorothea Dix, and Walt Whitman. Your mother is the modern-day example that is in line with these dedicated nurses that came before her. We are blessed and enlightened to have known her influence and will honor her legacy through the art of nursing and strong family bonds.
Sincerely,
Joanne, Steven, Laura and Daniel MacFie

What a beautiful & full life Victoria led. I'm sorry for the loss you are all experiencing. May she Rest In Peace & may God give all of you peace as you mourn this tremendous loss in your family.
With love & prayers, Laurie Large
Laurie Large - Wednesday February 10, 2021 via Memorial Candle
Share This:
1 2 next page >>
Page 1 of 2
Share
×