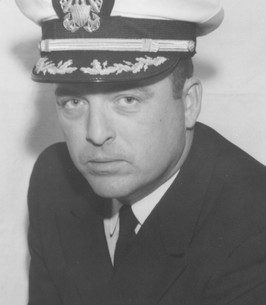 Share this tribute
Memorial Candles Lit for Thomas | SEE ALL
Light a Candle
"We are honored to provide this Book of Memories to the family."
— Oliverie Funeral Home
"We were blessed to have you and Aunt Joan in our lives; with gratitude and appreciation."
— Karen McEnaney
Funeral Details Memory Wall Photos & Videos Send Flowers

Print
Capt. Thomas J. McEnaney, Jr., (USN Ret), of Manchester died Tuesday September 1, 2020, at home. Some time before his 87th birthday this last August, he decided he wanted to expire peacefully, perhaps with his faithful dog Rusty at his side, lying on a hillside contemplating the stars. Yet, for the restless soul having lived a sailor's "vagrant gypsy life," there is poetry and profundity in passing from home to Home. Born in Albany, NY, to Thomas J. McEnaney, Sr., and Rose Mary Ahern, he began his journey, a small boy attending Mass with his mom. From Albany the young man traveled a short hitch-hike east on I90 to the College of the Holy Cross in Worcester, MA, where he earned his BA in Economics. Upon graduation he took a commission in the US Navy. In the Navy he met, attended daily Mass with, courted, and married his beloved Joan -- herself a naval officer who outranked him. Briefly. They began their life together, stationed apart: Joan in Philadelphia; Tom in Newport. Their love intrepid (and undeterred by the Navy), Tom and Joan started a family immediately, facing and overcoming the time and miles apart. Through Tom's extended tours of sea-duty, he voyaged the globe with his family always there in his home port, wherever that may have been. Joan was his loving anchor in stormy seas and still harbors alike, their quiet, humble faith the linking chain and bond. Together they provided well for their children, striving to ensure that each was happy, healthy, and active; well loved, well educated, and well disciplined. Between his tours at sea, there were cross country sightseeing trips in the car, trips to Disneyland, ocean cruises, Sunday outings after Mass or Sunday brunches, excursions through Europe, and ski trips. He wrote a letter once, describing our life of "half packed suitcases, moving from place to place," in which we learned that home isn't so much a destination, "it's family." Following his naval career decorated with ribbons and commendations, a bronze star, a gold star, a MA in International Affairs from George Washington University, and a wealth of sea stories, Tom began his next career as Assistant to the Chairman of a Fortune 500 company. Among his various duties and responsibilities, he most enjoyed organizing and managing the monthly prayer breakfasts offered to, and well attended by many of the best and the brightest in the Northeast. From there he went on to manage a retreat house outside Boston and then he finally retired and moved with Joan to the Renaissance community in Manchester in 2002. Throughout his life of sojourning and seeking, Tom discovered a kindred soul in and developed a filial affinity and admiration for Thomas Merton. Not only was there Merton's draw to monasticism coincidentally shared by Tom as a teen and really throughout his life, there were also similarities in the rambunctious and, at times, wayward boys' younger behaviour. Indeed, young Tom was well known to his parish priest, to try to disguise his voice in the confessional. At which point to Tom's chagrin, he inevitably would be invited to serve Mass, . . . after absolution. Tom loved life and studied so many aspects of it with his voracious appetite for reading. Above all though, there was Merton. He read anything and everything by him or about him, attended lectures he would have been qualified to present himself, took retreats at Gethsemani (Merton's monastery), and immersed himself in his independent study and quest for contemplative, centering prayer. At the same time, he loved people and being among them. Tom could host incredible parties where the only thing prayerful would be the contrite, "Oh God!" the following morning. He lived and loved life, loved his wife, his family, his God and his fellow man. Now, "the long trick's over," as the poet says. It's time for the quiet sleep, well deserved. But not too long, Dear. Your God and your wife await. He is predeceased by his wife Joan, in June, his sister Rosemary McEnaney, and his daughter-in-law, Donna. Surviving are his children, Thomas J III, Michael, Siobhan McEnaney-Hayes & husband John, and Maura Moralic & husband Emir, brother, Robert J. McEnaney and sister, Carol Lysogorski, 8 grandchildren John, Patrick, Brigid, Brendan, Kristina, Elisabeth, Anya & Audrey and 5 great grandchildren, Lorcan, Declan, Breccan and twins Thomas & James. Visitation is 9:30 to 10:30, at Oliverie Funeral Home, 2925 Ridgeway Road, Manchester, followed by an 11AM Funeral Liturgy on Friday at St John’s Church, 619 Chestnut St, Lakehurst with interment to follow at Brigadier General Wm C Doyle NJ Veterans Cemetery. In lieu of flowers please make donations to Abbey of Gethsemani, 3642 Monks Rd., Trappist KY 40051.

We were blessed to have you and Aunt Joan in our lives; with gratitude and appreciation.
Karen McEnaney - Thursday September 03, 2020 via Memorial Candle
Share This:

When you pass through deep waters I will be with you -Isaiah 43:2
Brigid, Brian, James & Thomas - Thursday September 03, 2020 via Heartfelt Sympathies
Share This:

Dearest Siobhan and family, Remembering your father and how he affected our lives and thinking of all of you say good bye...
Jim and Dinah Sapunarich - Thursday September 03, 2020 via Donation
To: Monks of Gethsemani
Share This:

In loving memory of the good Captain (Popeye) - May the roots of this tree intertwine with those of the tree planted in memory of his beloved Joan.
Lisa and David Hoke - Wednesday September 02, 2020 via Memorial Tree
1
Page 1 of 1
Share
×