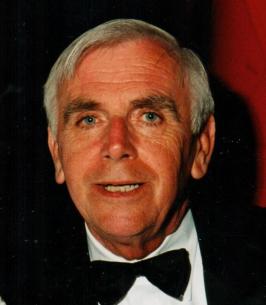 Share this tribute
Memorial Candles Lit for Thomas | SEE ALL
Light a Candle
"We are honored to provide this Book of Memories to the family."
— Oliverie Funeral Home
"Heartfelt condolences to the family and friends on the passing of a wonderful man Death leaves a heartache no one can heal. Love leaves..."
— Alexandra Goldelman
Funeral Details Memory Wall Photos & Videos Plant a Tree

Print
Thomas J. Kelly of Manchester NJ passed away on Wednesday, December 11,2019 comfortably in his home. He was born in 1937 to Michael and Helen Kelly of Jersey City. He graduated from Our Lady of Victories grammar school, Snyder HS and St. Peters College all of Jersey City. Tom served in the United States Army from 1957 to 1959 primarily in Germany. He was married to Maureen (nee Shanahan) in 1962. Upon graduation from St. Peter’s College he went on to an over 40-year career in the NYC Real Estate Industry. He was a Vice President and Controller of Rockefeller Center, where he worked for 25 years. He continued his career as a Vice President and Controller of SL Green Real Estate and retired in 2007 from CB Richard Ellis. Tom was a lifelong active member of his communities. He was a twice elected Republican Councilman from Dunellen NJ, coached both his sons in youth sports, sang in the choir at Holy Trinity Roman Catholic Church of Westfield and was a Eucharistic Minister administering Holy Communion in Monmouth and Ocean county area hospitals and nursing homes. His most rewarding community association, both giving and receiving was with Alcoholics Anonymous. Tom lived in sobriety the last 19 years of his life.
In addition to his parents he is predeceased by his sisters; Ginny, Dorothy, Gerri (Fred), and Patsy (Buddy) and his brother Mike. He is survived by his loving wife Maureen of 57 years his son Dan (Cathy) and Tom (Moira) and grandchildren Caroline and Deirdre. Also survived by sisters; Helen Roberts (Vern), Marilyn Horath and Kathy Ardizzone (Al) and brothers Bob (Judy), Jack (Carole) and Billy (Lisa), In-laws Sheila and Joe Sikora, Gene Bocis, Carole Kelly and 35 nieces and nephews. He will be missed. Visitation is Wednesday from 4-8 PM at Oliverie Funeral Home 2925 Ridgeway Rd Manchester. Funeral Liturgy is 10 am at St John’s Church, Lakehurst with interment to follow at Brigadier Gen Wm C Doyle NJ Veteran’s Cemetery, Arneytown. To those wishing to donate in memory of Thomas please make donations to Calvary Hospital 1740 Eastchester Rd, Bronx NY 10461.


To plant a tree in memory of Thomas Joseph Kelly, please visit our Heartfelt Sympathies Store.

Our Deepest Condolences
The Preite Family - Wednesday December 18, 2019 via Heartfelt Sympathies
Flowers were purchased and a memorial tree was planted
Share This:

So sorry for your loss, my deepest sympathies.
Bob Cozzolina - Tuesday December 17, 2019 via Memorial Tree | Plant a tree in memory of Thomas
Share This:

Remember that we love and care about you.
The Sikora Family - Tuesday December 17, 2019 via Heartfelt Sympathies
Flowers were purchased and a memorial tree was planted
Share This:

Dan & Family, Our thoughts and prayers are with you. Please accept our condolences... Love Jackie, Steve, Paige, Lila, Eddie and Brendon
Sunday December 15, 2019 via Heartfelt Sympathies
Share This:

Thinking of you and yours.
John & Monia Shanahan Jeremiah & Karen Shanahan - Saturday December 14, 2019 via Heartfelt Sympathies
Share This:

Sent with love and remembrance,
Vern and Helen - Saturday December 14, 2019 via Heartfelt Sympathies
Share This:

Heartfelt condolences to the family and friends on the passing of a wonderful man
Death leaves a heartache no one can heal. Love leaves a memory no one can steal
Alexandra Goldelman - Friday December 13, 2019 via Memorial Candle
Share This:

Please accept our most heartfelt sympathies for your loss... Our thoughts are with you and your family during this difficult time.
Alexandra Goldelman, Jacqui Vena, Lisa Fanning , J - Friday December 13, 2019 via Heartfelt Sympathies
Share This:
1 2 next page >>
Page 1 of 2
Share
×

View Video
Plant a Tree in Memory of Your Loved One
An Honouring a Life memorial tree is a unique tribute which provides global benefits like no other memorial gift could.
Plant a Tree
Place a Donation
Choose from a Family Preferred Charity or select your own.
Place a Donation
Family Log-In