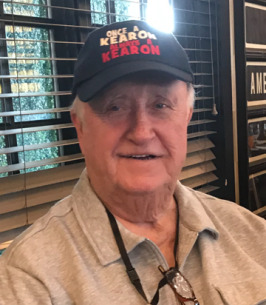 Share this tribute
Memorial Candles Lit for Thomas | SEE ALL
Light a Candle
"We are honored to provide this Book of Memories to the family."
— Oliverie Funeral Home
"Rest in Peace, Mr. Kearon. Your beautiful family is a testament to a life well lived. Out thoughts and prayers are with the Kearon fa..."
— The Gonzalez Family
Funeral Details Memory Wall Photos & Videos Send Flowers

Print
Thomas F. Kearon
May 27, 1936 - February 16, 2021
Thomas “Tom” F. Kearon, 84, of Manchester, New Jersey, died peacefully,
surrounded by his family, on Tuesday, February 16, 2021, at Ocean Medical Center
in Brick. Born in New York City, he resided in Lynbrook, New York for 34 years
before moving to Manchester 20 years ago. He is survived by his wife of 61 years,
Mary Ann Kearon, sons and daughters-in-law, Kevin and Robin, Christopher and
Rebecca “Becky,” Brian and Jo Ann, and daughter and son-in-law, Michele and her
husband, Andrew “Andy” Ryan, his brother, George Kearon, and his wife, Barbara,
his sister, Maureen Byrne, and 7 grandchildren, Patrick, Jack, Maggie, Rachel,
Darby, Annie and Drew. Due to Covid-19 restrictions, a private Memorial Mass,
for the immediate family only, will be held on Wednesday, February 24th at 10:30
a.m. at St Luke’s Church, Toms River, with interment to follow at St. Mary of the
Lake Cemetery, Lakewood. A Zoom Video Memorial will be held for all family
and friends to pay their respects and share stories this Sunday evening, February
28th from 7-9 p.m. Those wishing to attend should send email notification to son,
Kevin Kearon, at kevinkearon@gmail.com to receive updates and the Zoom link.
In lieu of flowers, please consider making a donation in Tom’s name, to the
Wounded Warrior Project, at https://www.woundedwarriorproject.org/donate or to
370 7th Ave, New York, NY 10001. To send online condolences and see slideshow,
please visit our website at https://www.oliveriefuneralhome.com/memorials/
thomas-kearon/4534491/service-details.php.
A Remembrance
On the morning Thomas Francis Kearon was born in New York City, May 27,
1936, the majestic liner, Queen Mary, departed Southhampton, England for New
York, on its maiden voyage, and his future wife, Mary Cosgrove, turned 9 days old.
Second son and fourth child of George and Bridget Kearon, he was born into
their traditional, Irish Catholic family. The Kearons of Rockaway Beach, were
hard-working and church-going who, along with their many cousins, aunts and
uncles, loved summer beach bungalow life which led to a lifelong love of the
ocean. He was a strong swimmer and lifeguard.
His father, George, never took a sick day in his 40 years working for Con
Edison and was given its, Iron Man Award, in recognition. His mother, Bridget,
raised five children and presided over a loving and beautiful, Irish family home on
Desoto Road in Rockaway Beach resplendent with white-laced tablecloths, statues
of the Virgin Mary and Waterford crystal.
As he entered kindergarten, World War II raged in Europe and the Pacific.
Every family had a son or friend’s son, and often several, overseas fighting in the
war. Those experiences and memories deeply influenced him.
He was nine when Japan surrendered and enlisted in the Army when he was 21.
He served as a drill sergeant and officer and was honorably discharged.
He married Mary Cosgrove in 1959. They were happily married for 61 years.
He loved and maintained his cars immaculately.
His love and fearlessness of the water, and good-natured sense of mischief,
resulted in good fortune when he famously won his friend, Bill’s, beloved, 1967
vintage Dodge Monaco, after he won an improbable wager with his only briefly
snickering friend, that he couldn’t waterski a nautical mile on one of those six foot
wide, round, utility company cable spool table tops, across eastern Long Island’s,
Peconic Bay.
After retiring from the Army, he became a salesman and entrepreneur. He sold a
wide variety of products and services over the years and cherished the
independence business ownership allowed him.
Known as a dapper dresser, he kept everything he owned clean and wellorganized.
He and his growing family left Astoria in 1964 and bought a “country” home in
Lynbrook where he and Mary raised their four children until they retired and
moved to Manchester, NJ and Florida.
He took his family on summer camping trips on which they never lacked for
comfort or supplies because of his Army training and love of the outdoors. He
loved to travel with Mary around the country and Europe and for years enjoyed
their timeshare in Aruba. He once memorably led a busload of tourists in the
Bahamas in song and dance while vacationing there.
He built his family a beautiful Swiss chalet-style vacation home in the woods at
Big Bass Lake in the Poconos. It was his masterpiece, a tranquil and peaceful
refuge from the demands and rigors of work and accounted for his children all
attending nearby colleges.
He was musically self-taught and enjoyed playing the accordion and keyboard.
He loved cigars and Old No. 7 Jack Daniels Kentucky Mash Whiskey. He was a
film buff. He loved John Wayne and Maureen O’Hara. His favorite film was, The
Quiet Man. He was a military historian and read about World War II and history
constantly.
He loved to sing, had a beautiful voice, knew all the old songs and kept his
family entertained on their innumerable long drives on family vacations.
He was a beloved brother to Jack, Nancy, Maureen and George and is survived
by Maureen and George.
He worked at times three jobs at once to put his four kids through college. He
had seven beautiful grandchildren each of whom had a deep love for and close
relationship with their grandfather.
He taught his children about right from wrong, work ethic, civic-mindedness,
decency, patriotism and the importance of family.
He loved dogs and brought strays home to live and especially loved Great
Danes.
He loved his white 1998 Mercury Marquee ragtop which is being donated to a
needy veteran through the Wounded Warriors Project, at Mary’s request.
He had great friends too. Jerry, Frank, Al, Bill and his longtime friend and
neighbor, Joe.
He was especially close to his younger brother, George.
He loved golf.
He chaperoned Cub Scout and Boy Scout trips.
He donated regularly to charitable causes, especially to homes for orphans.
Mary was the love of his life.
He was a really nice man.
We will miss him every day forever.
So long, Tom.


To send flowers to the family of Thomas Francis Kearon, please visit our Heartfelt Sympathies Store.

BZ
Sincere condolences. We were very lucky to have such special dads. May his memory be for a blessing.
Barbara and Bruce Zeiger - Tuesday February 23, 2021 via Condolence Message
Share This:

My heartfelt thoughts are with the Kearon family. Each of us lives on with the memories and Life Lessons of those who have touched our minds and hearts. Knowing Chris and Brian, I can understand more about the legacy of a remarkable man and remarkable family. Treasure all of the moments.
Marilyn Palley - Tuesday February 23, 2021 via Donation
To: Wounded Warrior Project
Share This:

Our deepest condolences to the Kearon Family.
Steve and Kathy Hoek - Monday February 22, 2021 via Heartfelt Sympathies
Flowers were purchased and a memorial tree was planted
Share This:

CM
Uncle Tom
The Dodge Charger, golf, cigars, fishing in the Poconos, the accordion on hay rides, shooting guns, tennis, a man cave in his house before his time, a true mans man who provided for his family from The Sovereign Nation of Rockaway Beach!! RIP and God speed!
Christopher J. Maloney - Sunday February 21, 2021 via Condolence Message
Share This:
MC
I am so saddened to hear this news. I loved visiting the Kearons with our family. Tom was larger than life. Our visits were filled with stories, laughter and tons of smiles. The great dane standing up to give Tom a kiss was always a wonderful picture!!! My thoughts are with Tom's family and friends. Michelle Martin Conover
Michelle Conover - Sunday February 21, 2021 via Condolence Message
Share This:

3 trees were planted in the memory of Thomas Francis Kearon

TF
All of us Scranton guys always ask about each other's parents. So this news is heartbreaking to me because of how much I cared for and about Mr. Kearon and, indeed, his entire family. I will miss his genuine, warm welcome every time I saw him. Rest peacefully knowing that you left a positive impression upon many people about the importance of being a devoted husband, father and grandfather.
Tim Markey and family - Thursday February 18, 2021 via Condolence Message
Share This:

Rest in Peace, Mr. Kearon. Your beautiful family is a testament to a life well lived.
Out thoughts and prayers are with the Kearon family..
The Gonzalez Family - Thursday February 18, 2021 via Memorial Candle
Share This:
1
Page 1 of 1
Share
×