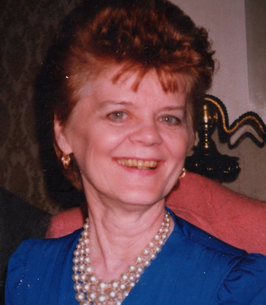 Print
Sophia Veronica Laskowski Farrar passed quietly at home on Friday August 28, 2020. Born in Brooklyn NY on January 11, 1928, she was one of ten children born to Victoria Bartold Laskowski and Edmund Laskowski.

She married Joseph Farrar on April 23, 1949, and was first and foremost a devoted wife and mother. Together they raised two children, Deborah Farrar Starker and Michael Joseph Farrar.
In between raising the children, she worked for many years in the offices of Dr. S. Young as their office manager and also held various positions in secretarial and communications at the American Cancer Society. During WWII she worked for The United States Army Signal Corps assisting with communications, and later for Western Union.

Sophia had a beautiful singing voice, and along with her 7 sisters and 2 brothers would always regale the family and all who were present with a sampling of songs--especially in Polish. She loved nature, especially bird-watching, and once stared down a brown bear at their summer home in the woods near Wurtsboro, New York. She was a loving wife to Joseph for 71 years, and in their retirement before she became ill, she enjoyed walking their 9-hole pitch and putt and acting as both caddy and cheering squad for her husband. Over the past decades, her grandchildren were the center of her universe.

She is survived by her husband of 71 years, her son Michael and daughter Deborah, three granddaughters, Leah Frances Starker, Remy Victoria Hayes and Kimberly Smith, one grandson, Brian Michael Farrar and a great grandson, Logan Barrett. She is also survived by her younger brother Richard Laskowski.

In lieu of flowers, donations can be made in her memory to St. Jude Children’s Research Hospital, 501 St Jude Place, Memphis, TN 38105 (https://www.stjude.org).

To send flowers to the family of Sophia V. Farrar, please visit our Heartfelt Sympathies Store.

We encourage you to share any memorable photos or stories about Sophia. All tributes placed on and purchased through this memorial website will remain on in perpetuity for future generations.

With love, Joe, Melissa and Jordyn and Your Peer Group Family sent flowers to the family of Sophia V. Farrar.
Send Flowers

Send all our love during this difficult time. You all are in our thoughts and prayers.
With love, Joe, Melissa and Jordyn - Saturday August 29, 2020 via Heartfelt Sympathies | Order flowers in memory of Sophia
Share This:

Our deepest condolences, keeping you all in our thoughts.
Your Peer Group Family - Saturday August 29, 2020 via Heartfelt Sympathies | Order flowers in memory of Sophia
Share This:
1
Page 1 of 1
Share
×