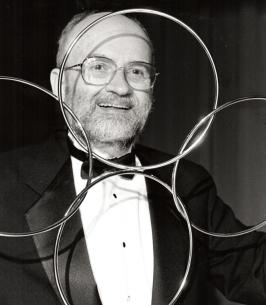 Memorial Candles Lit for Roger | SEE ALL
Light a Candle
"We are honored to provide this Book of Memories to the family."
— Oliverie Funeral Home
Funeral Details Memory Wall Photos & Videos Send Flowers

Print
Roger Barr, 87, passed away peacefully on September 22, 2020 after a brief illness. He was born and raised in Orange, NJ. He lived in Denville, NJ, and Rockaway, NJ, before moving to Leisure Village West in 1997. Roger received a Bachelor’s and Master’s degrees from Montclair State Teachers College and also attended New Jersey Institute of Technology and New York University. He taught physics for 38 years at Montclair High and Mountain Lakes High School. He was a Veteran, proudly serving his country in the US Army during the Korean War. He received the Distinguished Physics Award in 1986 and the Geraldine Dodge Award in 1987. He was invited presenter at six conventions of the NJ Science Teachers Association. At each of the schools where he taught, he increased the enrollment of physics students especially that of female students. Roger was accomplished in many areas. He was a professional magician from his teenage years to the 1990s. A member of both the International Brotherhood of Magicians (Order of Merlin Shield) and the Society of American Magicians. He was an accomplished photographer and served as President of the West Village Camera Club for four years in Leisure Village West. He was a dedicated Red Sox fan since 1949 and attended spring training camps. He was a skilled table tennis player with a rating of 1386 in the 70 age group. He was awarded a distinguished anglers award in 1968 by Sports Afield Magazine for catching a four pound Eastern Chain pickerel. He won three state championships in track and field for race walking, placing fifth in the United States for outdoor track, third in the USA Masters for indoor track at 15K. Roger is survived by his wife Ann (MacFadyen) of 64 years, daughters Carol Rehm and her husband James, Ellen Genovesi and her husband Anthony, and two grandchildren Paul and Lori Genovesi. Visitation will be from 2 to 4 pm on Sunday, September 27th at Oliverie Funeral Home, 2925 Ridgeway Road, Manchester NJ 08759. Funeral will be held at 11:00 am Monday, September28th at Whiting United Methodist Church, 50 Lacey Road, Whiting NJ 08759. Distancing requirements will be followed. Interment will be private at Brigadier General William C. Doyle Veterans Memorial Cemetery. In lieu of flowers, contributions in his name may be made to the Shriner’s Hospital for Children, 3557 North Broad Street, Philadelphia, PA 19140.

To send flowers to the family of Roger T Barr, please visit our Heartfelt Sympathies Store.

We encourage you to share any memorable photos or stories about Roger. All tributes placed on and purchased through this memorial website will remain on in perpetuity for future generations.

Please accept my most heartfelt sympathies for your loss... My thoughts are with you and your family during this difficult time.
John J Polachek - Friday September 25, 2020 via Heartfelt Sympathies | Order flowers in memory of Roger
Share This:
1
Page 1 of 1
Share
×