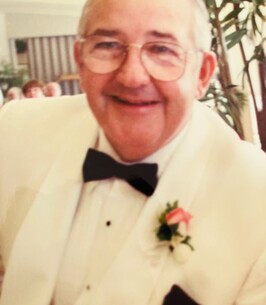 Memorial Candles Lit for Raymond | SEE ALL
Light a Candle
"We are honored to provide this Book of Memories to the family."
— Oliverie Funeral Home
Funeral Details Memory Wall Photos & Videos

Print
Raymond J. Pierce, 83, of Lake Ridge, Toms River, died peacefully, surrounded by his family, on Friday, March 4, 2022 at Jersey Shore Medical Center. Born in Bayonne, he served his country in the Marine Corp and married his beloved wife of 60 years, Christine on August 29, 1961. He later graduated from Rutgers University with a Bachelor of Science and moved his family to Wayside/Ocean Twp. in 1973 before moving to Toms River in 1996. Raymond was employed for over 35 years as an engineer for Western Electric/Bell Communications Research in Piscataway before retiring in 1993. He worked part time as a consultant for the firm after retirement, traveling widely in North America and Europe. He was very active within the Lake Ridge Men’s Club & Finance Committee. He was an avid deep-sea fisherman, enjoying countless hours with family and friends on the ocean aboard his boat “Christina” which he ran out of Shark River. He enjoyed reading, woodworking & was a life-long carpenter. He was a true “Jack of all Trades.” His most cherished memories were those times vacationing with his family and grandkids. Raymond was predeceased by his parents: Adam and Helen, sisters: Helen, Dorothy, & Rita. He is survived by his wife, Christine J. Pierce (Stevens); sons: Kevin A. & Leslie C. Pierce, and Raymond J. Pierce & Catherine A. Milley; sister: Geraldine Magda; 6 grandchildren: Hannah, Luke, Whitney, Zoe, Ezra, & Hazel; and brothers/sisters-in-law: Thomas & Pat Stevens and Joseph & Barbara Stevens and many nieces and nephews. Memorial Mass will be March 15, 10:30 am at St. Luke Church, Toms River. Private inurnment will follow at 1:00 pm. No flowers please. In lieu of flowers, donations can be made to the Make-A-Wish Foundation 1034 Salem Rd Union, NJ 07083.

We encourage you to share any memorable photos or stories about Raymond. All tributes placed on and purchased through this memorial website will remain on in perpetuity for future generations.