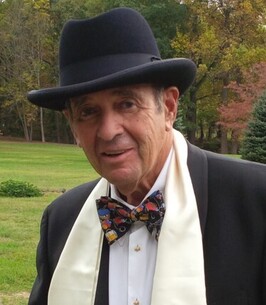 Share this tribute
Memorial Candles Lit for Michael R. Golding MD | SEE ALL
Light a Candle
"We are honored to provide this Book of Memories to the family."
— Oliverie Funeral Home
"He will be missed by everyone who knew him "
— Puny
"Sorry to hear about Michael passed away "
— Puny
Funeral Details Memory Wall Photos & Videos Send Flowers

Print
Michael R. Golding, M.D. passed away November 26, 2022 at the age of 89. His wife of 21 years, Mary Mottola-Golding, was by his side. Michael is survived by his daughters, Beri Golding (fiancé Jarret Williams) and Brittny King (husband Brian King), two beautiful granddaughters, Rayne and Ellie Joy, loving sisters-in-law and brothers-in-law, nieces and nephews, grandnieces and grandnephews. Dr Golding spent his life positively impacting the health care of New Yorkers as a cardio-vascular-thoracic surgeon and as an advocate for patient care. He received his MD from the State University of NY Downstate Medical Center, doing his internship at Mt Sinai, and residency at Kings County, Brooklyn. Dr Golding’s time at Downstate included Instructor of Surgery, Assistant Professor of Surgery, Associate and Clinical Professor of Surgery. In 1998 Downstate awarded Dr Golding title of Emeritus Clinical Professor of Surgery. From 1977-1989 he was Director of Surgery at Lutheran Medical Center, Brooklyn. Dr Golding’s involvement in many organizations included time as president of the Tri Boro Association Directors of Surgery, Brooklyn Surgical Society and the Bay Ridge Medical Society. He was on the boards of the Directors of Brooklyn and Long Island Chapter of American College of Surgeons, State Board of Medical Conduct (OPMC). Panel member of Preoperative Protocol, NYS Department of Health. Member of the Federation of State Medical Boards. Fellow of the American College of Surgeons. Dr Golding’s commitment to the healthcare of New Yorkers during and after his time in the operating room was best exhibited by his three decades serving at different positions within the United Hospital Fund. A resolution presented to Dr Golding from the United Hospital Fund in 2019, noted that,” He brought to the board a deep understanding of health care and the patient experience as a revered and accomplished surgeon. His kindness and deep caring about UHF, New York’s health care, and the human condition added an important dimension to UHF deliberations and earned the respect and affection of his fellow directors. That Michael R. Golding, M.D., be named Honorary Director of United Hospital Fund…” A past president of the UHF wrote about Mike, “He was a wise counselor, a good friend, a thoughtful commentator on many things, and a very generous soul. They don’t make them like him anymore”. Dr Michael Golding, one of kind, will be missed. Thanks to Dr Ragno, Dr Shields, Dr Gaudino, Dr Brancaccio, Dr Lazzaro, Dr Berger, Dr Joseph, Physical Therapist Mark Pacchiano, Duz Riley, Pharmacist Keyur Shah of Marlboro, and all Mike’s special friends and physicians who were instrumental in helping Mike maintain a high quality of life as he got into his 80’s and this would not have been possible without his long time driver and friend, John Fiore, making sure Mike arrived at his meetings and appointments safely and “on time”. MRG. May he Rest in Peace.

We encourage you to share any memorable photos or stories about Michael. All tributes placed on and purchased through this memorial website will remain on in perpetuity for future generations.

Add Photos Post Condolence
LS
I have been fortunate to have known my brother-in-law Dr. Mike for over 20 years. We spent many good times over the years during holidays…birthdays… I sat next to him and we would talk for hours. He was a kind and loving man …a very special man… full of knowledge and always willing to help others…I will miss him dearly…he was so inspirational to me…I know he was loved by everyone and will be missed by us all…May God bless and watch over you…
Louis Silvestri - Monday January 16, 2023 via Condolence Message
Share This:
T
For any credit repair services just contact 760creditspecialist@gmail.com or Text or call him via +1(779)3799843. He did some tremendous credit work on my credit bureaus report by erasing all the past eviction, negative items and help me to boost my credit score back to 789 across the three credit bureau report. I can’t believe I could got approved for car loan within the next few days and just moved in a nice apartment with my husband. I will always be grateful to him for erasing my bad credit records off my credit bureaus profile.
tyler - Monday November 28, 2022 via Condolence Message
Share This:

He will be missed by everyone who knew him
Puny - Saturday November 26, 2022 via Memorial Candle
Share This:

Sorry to hear about Michael passed away
Puny - Saturday November 26, 2022 via Memorial Candle
Share This:
1
Page 1 of 1
Share
×