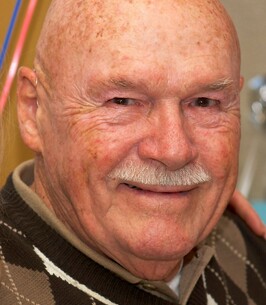 Memorial Candles Lit for Martin | SEE ALL
Light a Candle
"We are honored to provide this Book of Memories to the family."
— Oliverie Funeral Home
Funeral Details Memory Wall Photos & Videos Send Flowers

Print
On Monday, September 19, 2022, Martin J. Ruby Jr., 88, loving husband, father, and grandfather passed away. He was born on December 22, 1933 in Jersey City and resided in Lyndhurst with his family before retiring in Toms River. After high school, Martin enlisted in the Air Force where he worked through the ranks up to Staff Sergeant in the Strategic Air Command. After an honorable discharge from the Air Force, he pursued an education through the Teterboro School of Aeronautics for his Airframe and Powerplant licenses. This education brought him to his career in American Airlines in aviation maintenance for 37 years. Along with his career path, Martin’s determination and work ethic allowed him to be involved with the Boy Scouts as a leader in Jersey City and Lyndhurst, a member of the Lake Ridge Board of Directors, past-president of the Men’s Club, chairman for the St. Luke Church Picnic, and a member of the Bocce Traveling Team. During his down time, Martin enjoyed golfing, fishing, working on puzzles, and camping with his family. He is predeceased by his children, Martin J. Ruby III and Barbara J. Ruby-Meccia. Surviving is his wife of 65 years, Barbara R. Ruby, son, Charles G. Ruby & wife, Patti, a sister, Dolores Begalke and 3 grandchildren, Kerri Horvath, Martin Meccia and Clement Meccia. Visitation is Friday from 4-8 PM at Oliverie Funeral Home, 2925 Ridgeway Road, Manchester. A Funeral Liturgy will be Saturday at 9:15 AM at St. Luke Church, Toms River with interment to follow at Holy Cross Cemetery in North Arlington, New Jersey. The family will be receiving friends and family from 3 PM at Martin and Barbara’s place of residence.

We encourage you to share any memorable photos or stories about Martin. All tributes placed on and purchased through this memorial website will remain on in perpetuity for future generations.

Remembering you and Martin Ruby in our minds and in our hearts.
Clement, Martin and Clement - Thursday September 22, 2022 via Heartfelt Sympathies | Order flowers in memory of Martin
Share This:

With love from, Charlie & Patti
Anonymous - Wednesday September 21, 2022 via Heartfelt Sympathies | Order flowers in memory of Martin
Share This:

With love from, Kerri, Martin & Clement
Anonymous - Wednesday September 21, 2022 via Heartfelt Sympathies | Order flowers in memory of Martin
Share This:
CM
Sending our deepest condolences to everyone.. We have such cherished memories.. Such a kind man.. RIP Mr.. Ruby.
Cheryl Matarazzo - Wednesday September 21, 2022 via Condolence Message
Share This:

Rejoice in your memories and know he is safe. Let the love of your angels guide and protect you during g this difficult time. God bless you all
Abby, John, James and Mackenzie Boles - Wednesday September 21, 2022 via Memorial Tree
DS
I was good friends with his son Charlie. I remember Marty as always being extremely friendly and always had a big smile on his face. He was like that favorite Uncle you had. Always welcoming ,always kind. My deepest to condolences to Charlie and of course the entire family.
Dave Scardelli - Wednesday September 21, 2022 via Condolence Message
Share This:
1
Page 1 of 1
Share
×