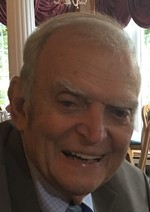 Lawrence E DePalma 87 of Toms River died Saturday March 21, 2020 at Magnolia Gardens, Toms River. Born in Taunton, MA lived in NJ since age 7 residing in Newark, Clark, Edison, Manchester and finally Toms River, NJ. Larry owned auto repair and parts businesses from 1976 until he worked for the Ocean County as a mechanic for 10 years before retiring to Leisure Village West in 2000. He served in the Army as a Corporal during the Korean War from 1953-1955. He earned an AAS from NJIT. He volunteered as a Scout Master for Boy Scout Troop #86 in Clark from 1966-1971 and was a member of the Grand Centurions, Italian American Club of Clark. He was a Grand Knight 4th Degree in the Knights of Columbus Council #9134, Past President of the Bocce Ball Club and Shuffle Board Club and a member of the Players Club and the Westernaires Singers all of Leisure Village West. Surviving are his wife of 68 years, Barbara M (Ward); son, Lawrence E DePalma Jr of Manchester & his fiancé Maida Reyes-Cote of Howell; brother, Richard DePalma & his wife Christie of Voorburg, Netherlands; sister, Carol D’Amato & her husband Frank; and 4 grandchildren, Lawrence E III, Dean, Madeline and Sa’Quan Gore and 1 great grandson, Luca Gore and many nieces and nephews. Private family visitation and interment is Wednesday at the Brigadier Gen Wm C Doyle NJ Veteran’s Cemetery, Arneytown. In lieu of flowers please make donations to the Alzheimer’s Association 400 Morris Ave Suite 251 Denville, NJ 07834.