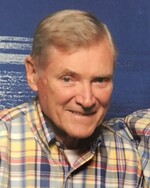 James M. Byrne 88 of Manchester passed away Wednesday February 23, 2022 at Ocean University Medical Center, Brick, NJ. James was born in Jersey City in 1933, to the late James and Helena Byrne, and raised there with his brother John (predeceased). He is survived by his wife of 61 years, Lorraine, his son Kevin and his wife Nancy of Chatham, his daughter Lynda and her husband Todd Price of Weddington, NC, and his beloved grandchildren, Ashley, Peyton, Lauren, Caroline and James. James resided in Middletown for 43 years before moving to Manchester in 2005. He served honorably in the Navy during the Korean War from 1952-1956, stationed in Bainbridge, Maryland. For 30 years he worked as an Account Manager for Western Union in New York City and as a National Accounts Customer Service Manager for Sprint Telecommunications in Princeton, NJ from 1989 until he retired in 2000. He loved his Irish heritage, history, a good Guinness and spending time with his family. Visitation will be Sunday February 27th, from 1 – 5 p.m. at Oliverie Funeral Home 2925 Ridgeway Rd., Manchester. A funeral mass will be held on Monday February 28th, 11 AM at St Johns Church at 619 Chestnut St., Lakehurst. Interment is 11 AM Monday March 7, 2022 at Brigadier Gen Wm C Doyle NJ Veterans Cemetery, Arneytown, NJ.