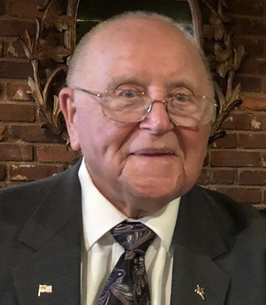 Share this tribute
Memorial Candles Lit for George | SEE ALL
Light a Candle
"We are honored to provide this Book of Memories to the family."
— Oliverie Funeral Home
"His son Walt reflected the values that he believed and taught."
— Mark Wallace
Funeral Details Memory Wall Photos & Videos Send Flowers

Print
George J Svarczkopf, 90, of Lakewood, NJ, went peacefully into glory Saturday, March 13, 2021 at home. George was a beloved husband, father, grandfather and great-grandfather. Born in Richmond, IN, George served four years in the US Navy. He was honorably discharged in 1952. He met and married the love of his life, Louise, in Anchorage, Alaska in 1959. The two lived in Midland Park for 44 years where they raised their family before moving to Lakewood in 2007. During his time in Bergen County, George was a Communications Engineer for Western Union in Upper Saddle River for 20 years, before retiring in 1991. He was a dedicated volunteer running the CYO basketball program for the Church of the Nativity, serving as a Eucharistic Minister and collecting food from local bakeries for delivery to a soup kitchen in Paterson. He enjoyed playing golf, repairing golf clubs and working jigsaw puzzles. He loved spending time with family, especially watching his grandkids sporting events. He enjoyed games, being an avid card player and a bingo caller for both the Church of the Nativity and his community at the Fairways at Lake Ridge. While in Lakewood he was a parishioner of St. Luke’s Church where he continued Eucharistic Ministry and was a member of the audio/visual team. George was predeceased by his wife, Louise, in 2017; brothers: Frank, Ambrose & Anthony Svarczkopf; sisters: Ilona Benjamin, Olga Fuller, Elizabeth Bodolai, Erma Gunsalus, Mary Coddington, Margaret Cassel, and Helen Toney. He is survived by his children: Walter (Eileen) Svarczkopf, James (Susan) Svarczkopf, Judith Svarczkopf and Christine Blarr (James); sister Irene (Ken) Lohmeier; 12 grandchildren: Tony (Karen) Svarczkopf, Dan (Wyoma) Svarczkopf, Dana Intravaia, Kerry Svarczkopf, Kymberly Hunter (Chris), Karyn, Kevin, Kylie and Kristy Svarczkopf, Erin, Julia and Melanie Blarr; and five great grandchildren: Arabella, Vera and Zechariah Svarczkopf, Juliette Intravaia, and Alexis Hunter. In lieu of flowers, please make donations to St. Jude Children’s Hospital, 501 St. Jude Place, Memphis, TN 38105 or St. Luke’s – SVDPS, 1674 Old Freehold Road, Toms River 08755.

To send flowers to the family of George J Svarczkopf, please visit our Heartfelt Sympathies Store.

In memory of George Svarczkopf
Andrea Mosey and family - Thursday March 25, 2021 via Donation
To: St Jude's Tribute Program
Share This:

His son Walt reflected the values that he believed and taught.
Mark Wallace - Sunday March 21, 2021 via Memorial Candle
Share This:

Sending our sincere sympathies to all of you. May wonderful memories of Uncle George fill your hearts and give you peace and comfort at this time.
Tony and Lisa Taviano - Saturday March 20, 2021 via Heartfelt Sympathies
Share This:

Sending our condolences and sympathy....you are in our thoughts.
Jill and Kathy - Thursday March 18, 2021 via Heartfelt Sympathies
Flowers were purchased and a memorial tree was planted
Share This:

Our thoughts and prayers are with all of you. May loving memories of Uncle George console you and give you strength in these difficult times. Love,
Mark and Sue Norris - Thursday March 18, 2021 via Heartfelt Sympathies
Share This:

Rest In Peace Uncle George. Love Carrie and Frank Svarczkopf
Frank and Carrie Svarczkop - Thursday March 18, 2021 via Heartfelt Sympathies
Flowers were purchased and a memorial tree was planted
Share This:

We had hoped to be with you to celebrate Uncle George's rich life--know that he and all of you are in our thoughts & prayers!
Ed & Denise Heffner - Wednesday March 17, 2021 via Heartfelt Sympathies
Share This:
J
I’m so sorry for your loss. Praying for the entire family.
Jamie Stapleton - Wednesday March 17, 2021 via Condolence Message
Share This:
ES
Today I am wishing I could get beat at Gin Rummy Knock...but of course I would have told you I was going to win! Thank you for always loving us so well. Love you Dad!
Eileen Svarczkopf - Tuesday March 16, 2021 via Condolence Message
Share This:
1
Page 1 of 1
Share
×