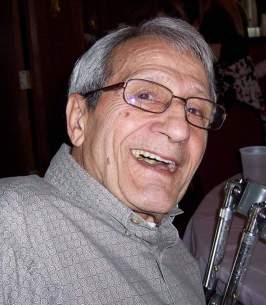 Memorial Candles Lit for George | SEE ALL
Light a Candle
"We are honored to provide this Book of Memories to the family."
— Oliverie Funeral Home
Funeral Details Memory Wall Photos & Videos Send Flowers

Print
George R. Malizia, of Manchester, died Sunday, March 8, 2020 at Community Medical Center. Born in Newark, he resided in Belleville for many years, moved to Kearny after he was married, and then retired to Manchester in 1997. He was a member of the International Brotherhood of Teamsters, the Local #408 Union, and a life member of the American Legion. He was a US Marines Corp. veteran of the Korean War. He was predeceased by his son Leonard in 1976. Surviving is his wife, Catherine of Manchester, sons, George & Jennie of Bergenfield, Anthony & Kelly of Lyndhurst, Michael & Denise of Middletown, daughter, Tamara & James of Dumont, 8 grandchildren and 10 great-grandchildren. Memorial gathering is on Thursday, March 12, 2020 from 11 AM – 1PM at Oliverie Funeral Home 2925 Ridgeway Road, Manchester. Memorial Service will be held on Monday, March 16, 2020 at 12:30 PM at Brigadier William C. Doyle Veteran’s Memorial Cemetery, Arneytown.

To send flowers to the family of George Richard Malizia, please visit our Heartfelt Sympathies Store.

With love and hugs,
Bob, Maureen, Misti, Joe and Joseph - Monday March 09, 2020 via Heartfelt Sympathies | Order flowers in memory of George
Share This:
1
Page 1 of 1
Share
×