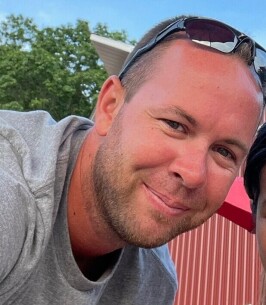 Share this tribute
Memorial Candles Lit for Douglas R Merwin | SEE ALL
Light a Candle
"We are honored to provide this Book of Memories to the family."
— Jackson Location
"Very Sorry for your loss - "
— Trista
Funeral Details Memory Wall Photos & Videos Send Flowers

Print
Douglas Ryan Merwin, beloved son, brother, uncle, and friend, passed away surrounded by family after a battle with brain cancer. He had just celebrated his 33rd birthday. He was born on January 11, 1990, as the quintessential middle child to Keith and Kim Merwin. Doug lived his life bringing people together. As a child, Doug was always on the move. Between sports practices, he could be found running through his childhood neighborhood starting a pickup kickball or football game. After attending Jackson Memorial High School, Doug became a Heavy Equipment Operator for GWS Construction and Caruso Excavating Inc. Also, Doug was an Ironworker for Local 399. A passionate NY Jets fan, avid fisherman, self- proclaimed great dancer, rarely seen without a Land Shark in his hand, Doug was well-known for peppering every great story with his colorful language. He never met a stranger he couldn’t convert into a drinking buddy, which led to a love of hosting parties full of the most unlikely friends. He will be lovingly remembered by his parents, Keith and Kim Merwin, siblings Joseph (Erin) Merwin, Daniel (Stephanie) Merwin, Lauren (Tim) Goldner, Christopher (Nicole) Merwin, and Steven (Ariana) Mika, nieces and nephews Isabella, Joseph, Duke, Mason, Colton, and Nova, as well as numerous relatives and friends. In lieu of flowers, the family requests donations to celebrate Doug’s loyal companion, Zoey. Donations can be made to SAVE Animal Shelter 1010, Rt #601, Skillman, NJ 08858. We invite all Doug’s friends and family to join us on Monday, January 23 from 4pm - 8pm at Oliverie Funeral Home; 125 S Cooks Bridge Road Jackson. Funeral Liturgy is Tuesday, January 24 10 AM at St Monica’s Church 679 W Veterans Hwy Jackson.

To send flowers to the family of Douglas R Merwin, please visit our Heartfelt Sympathies Store.

We encourage you to share any memorable photos or stories about Douglas. All tributes placed on and purchased through this memorial website will remain on in perpetuity for future generations.

In loving memory of Douglas Merwin
Wayne Merwin and Janet Hrbek - Tuesday January 24, 2023 via Donation
To: SAVE, A Friend to Homeless Animals
Share This:

Dan & Family, We are so sorry for your loss. You are in all of our thoughts and prayers as you are go through this difficult time .
Your ABF Family - Monday January 23, 2023 via Heartfelt Sympathies
Share This:

In loving memory of Douglas Merwin.
Gregory and Tammy Oldenburg - Sunday January 22, 2023 via Donation
To: SAVE, A Friend to Homeless Animals
Share This:

Keith & Kim, Both of you & your family are in our hearts, thoughts and prayers. We are so sorry for the loss of your son Douglas.
Gregory & Tammy Oldenburg - Sunday January 22, 2023 via Heartfelt Sympathies
Share This:
DC
We had an Easter party at Nicole and Chris’ House this past year and everyone was playing a game in which Doug was losing due to not having any clue on how to play. So I sat next to him and we played as a team and won and he just kept saying that I was the best teammate he could have had. He will always be missed
Dani Casper - Sunday January 22, 2023 via Condolence Message
Share This:

Keith & Kim so sorry for your loss
Natalie Price - Saturday January 21, 2023 via Donation
To: SAVE, A Friend to Homeless Animals
Share This: