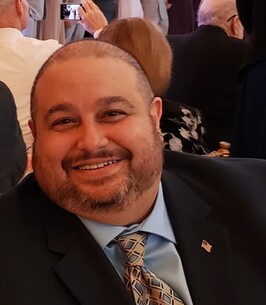 Share this tribute
Memorial Candles Lit for Philip | SEE ALL
Light a Candle
"We are honored to provide this Book of Memories to the family."
— Oliverie Funeral Home
"Dear Cathy, I am so very sorry for your loss. Please know that you and your family will be in my thoughts and prayers. With much lov..."
— Sharon Wisdom
"May your memory always burn bright in the hearts of your loved ones! "
— Monica Kitzmiller
"RIP Phil!! I will always remember your jokes and just being up beat. You made classes at the MAX fun!! "
— Veronica
"Phillip Always a bright light that shines inside and out! May your light now shine down on us all until we see you again!"
— Janine, Tim, Amanda and Christopher Sudowsky
"Phil we love you and will so miss you. I thought we would have more vacations together, and a few more trips to the OBX. RIP Brother, save..."
— Gregg, Alice, Geoff and Erica Olsen
"My prayers are with all 🙏 so sorry for your loss "
— Irene caroccio
"You will be missed forever Phil Famelio. You will always be remember in our hearts. Rest in Peace my friend. Amy Cito- FBI Newark"
— Amy Cito - FBI Newark Division
"Our nephew Phil was a remarkable young man who achieved so many goals and touched so many hearts in a short time on this earth. Our lo..."
— Ray and Santa DeFeis
"To Pete and Family. My heart goes out to you and your family. Although I never had the privilege of meeting Philip I am certain he was ..."
— Michael Laracuente
"Cousin Phil, you fought like a champ. Rest easy now."
— Cousin Dom
Funeral Details Memory Wall Photos & Videos Send Flowers

Print
Philip H Famelio was diagnosed with Esophageal Cancer September 2018, fought long and hard but ultimately lost the war against this beast of a cancer on February 4, 2020. He will lovingly be remembered by his wife Cathy and their daughter, the light of his eye, Kayla, his parents: Pete and Fran Famelio, his siblings: Anita Zimmer her husband Paul and their son Zach, Gina Oteri her husband Nick, and her sons Justin and Nicky Arons, Michael Cardinale and his wife Gia, Tina Post and her sons Joe and Tim, and his mother Anita Yerkes and her husband Ken. Philip will also be forever remembered by his numerous (Famelio, Davis, Cardinale, Sclafani and Dolan) extended family members and his dear friends. His story began nearly 51 years ago in the Bronx where he developed an over the top love of the Yankees. He spent his early days in the Bronx with his parents Pete and Anita, sisters, Anita and Tina, Uncle Vinny who was more like a brother, and the extended Davis family. From there he spent his early teens in Fishkill, NY being a kid while he could: riding and wiping out his bike down that giant hill, playing the bass with his band, running from the cops in the woods, making memories many good others really bad. Ultimately, he landed in Howell NJ with his dad and Fran and her children Michael and Gina Cardinale. Eventually it was a house with 5 teenagers as Tina and Anita moved in a few years later. With Phil the older “responsible” brother you can imagine some crazy fun experiences. One day in the summer of 1988 he went to Burger King to pick up Mike from work and ended up meeting Cathy who eventually became his wife of more than 26 years. They settled in Manchester and had their daughter Kayla. The greatest joy for Phil was being a dad and watching Kayla shine. Countless weekends you would find Phil as the only dad at dance class, cheering from the sidelines of soccer, coaching softball, or enduring hours of competitions for cheerleading, then ultimately marching band, and color guard. Phil began working for the FBI in 1989, and for the next 30 years went through a variety of positions made some lifelong friends, worked on some fascinating cases and traveled the country connecting with people everywhere he went. His career began with sitting in the shack over the midnight hours as security at Fort Monmouth. There may have been some snoring but there were also hours of homework as he put himself through Trenton State College. Later he progressed to a variety of computer, IT and supervisory positions at Newark. During this time, he earned his MS degree from University of Maryland UC and nearly completed his doctorate. Phil ultimately gained his dream position as a Computer Forensics Examiner at Hamilton where he helped put the bad guys away. Phil said he always wanted to “make a difference” and he did just that. Phil could always be counted on to brighten your day, share a random movie quote, support his NY teams, no matter how bad some of them got and most importantly make you smile. The Dalai Lama said that “Just as ripples spread out when a single pebble is dropped in water, the actions of the individuals have far reaching effects.” The ripples Phil created with his love, compassion, professionalism, craziness, and dedication will be felt both in his professional and personal life forever. The family would like to thank Meridian Hospice, especially his aides Edith and Karen and his nurse Maria for their care and guidance through the end. Visitation is Friday from 4-8 pm at Oliverie Funeral Home, 2925 Ridgeway Road, Manchester. Funeral Liturgy is Saturday at 12:30 pm at St John’s church, Lakehurst. Cremation will be private. In lieu of flowers, please make donations to either the St Jude Children’s Research Hospital,(www.stjude.org) 501 St Jude Place, Memphis, TN 38105 or to the Esophageal Cancer Awareness Association, P.O. Box 55071 #15530, Boston, MA 02205-5071 (www.ecaware.org)

To send flowers to the family of Philip H Famelio, please visit our Heartfelt Sympathies Store.

Eric Zimmer - Tuesday February 18, 2020 via Donation
To: ESOPHAGEAL CANCER AWARENESS ASSOCIATION INC
Share This:
MD
Cathy and Kayla,
I’m so sorry for your loss, you are in my thoughts and prayers🙏🙏
Mary Ann Dempkowski
Mary Ann Dempkowski - Saturday February 08, 2020 via Condolence Message
Share This:
MR
May god bless the Famelio family at this difficult time. Thoughts and prayers.

Please accept our most heartfelt sympathies for your lossour thoughts are with you and your family during this difficult time.
The Nappis - Friday February 07, 2020 via Memorial Tree
D
Our sincere condolences. We worked with Phil for decades at the Fort and the Newark Division. May the Lord watch over Phil and keep him in His loving care.
Denise and Bernie Showanes
Denise and Bernie Showanes - Friday February 07, 2020 via Condolence Message
Share This:

Forever in our thoughts.
Rich & Irene Pisco - Friday February 07, 2020 via Heartfelt Sympathies
Share This:
JF
We will miss you terribly my dear Nephew. Until we meet again. Cathy & Kayla, wishing you peace and comfort during this time and you have loving memories of Phil to hold on to forever.
Love Aunt Joyce & Uncle Tom
Joyce Famelio - Thursday February 06, 2020 via Condolence Message
Share This:

Please accept our most heartfelt sympathies for your loss. Our thoughts are with you and the family during this difficult time. Love you all.
Henry Davis & Elizabeth Davis-Donatelli - Thursday February 06, 2020 via Heartfelt Sympathies
Share This:

Dear Cathy,
I am so very sorry for your loss. Please know that you and your family will be in my thoughts and prayers.
With much love and peace,
Sharon Wisdom
Sharon Wisdom - Thursday February 06, 2020 via Memorial Candle
Share This:

Kayla and Cathy... Love you and here for you always and any time. We will always remember Uncle Phil with a smile. Love Liz, Kim & Dave and Steph&Jim
Liz, Kim & Stephanie - Thursday February 06, 2020 via Heartfelt Sympathies
Flowers were purchased and a memorial tree was planted
Share This:
1 2 3 next page >>
Page 1 of 3
Share
×